Gaze over the ocean from the Tsubaki observation deck (椿展望台) in Kinoura.

Percival Lawrence Lowell, a 19th and early 20th century American astronomer and writer, visited northern Noto and published “Noto: An Unexplored Corner of Japan” (1891), introducing the Japanese way of life at the time to the Western world. Even today, this region attracts a great deal of attention with its unique culture, being said that the virgin landscapes and the traditional lifestyle of the country remain unchanged.
This tour characterizes perfectly the variety that northern Noto has to offer, including traveling to the tip of the peninsula, Cape Rokkozaki (禄剛埼). You might want to consider combining an overnight trip to northern Noto with a visit to Wajima (輪島).
Although it’s easily accessible from Kanazawa by car, you may find it more convenient to rent a car at Noto Satoyama Airport (のと里山空港).

Cape Rokkozaki, the peninsula’s most northerly point, is nearly 50 kilometers (31 miles) from Wajima. Before climbing into the car, make sure to buy some food and drink, as there are very few restaurants and shops along the route apart from michinoeki until you get to the center of Suzu (珠洲) passing the cape.

Mado-iwa RockCruise up the seaside with a variety of roadside attractions, including the rocky Sosogi Coast (曽々木海岸) featuring the Mado-iwa (窓岩) rock formation that is shaped like a window. During winter months, particularly on stormy days, nami-no-hana (flowers of the waves) may be spotted around the Sosogi Coast. These are the masses of white foam that form when waves gnash against the rocky shore.

A delightful combination of sweetness and saltiness!

This seaboard area is also known as home to the traditional salt- manufacturing method known as agehamashiki.
Beginning with the preparation of the sandy salt field, the workers haul the buckets of sea water to the field and hurl them onto the sand. The sun and the wind evaporate the water, leaving the salt-rich sand. It’s just a part of this labor-intensive agehamashiki method. 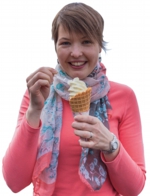 A delightful combination of sweetness and saltiness!
There are a few places you can eat and purchase the locally harvested salt.In Wajima-shio (輪島塩),you can try your hand at makingyour own spice featuring salt,as well as taste ice cream topped with salt. You may stop at Shio Cafe (しおカフェ), or salt cafe, also located on the sea shore, where you can enjoy drinks and dishes featuring the agehamasiki salt.

Be awed by cliffs and crashing
waves on the cape
overlooking the Sea of Japan.

Route 249 connects to 28, which is known to be a perfect coastal road for a dramatic drive. Here you can get a glimpse of small fishing villages clinging on to the cliffs. The thrill-packed drive will peak at around Kinoura (木ノ浦), where the road, with tall trees on one side and the blue sea on the other, winds through woods leading up the cape. For those who fancy lodging on the seaside, particularly a week-long stay, Kinoura Village (木ノ浦ビレッジ) provides eight cottages facing a beautiful beach and is the perfect hideaway. 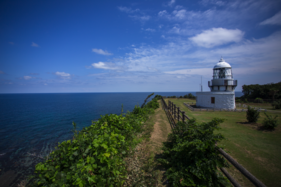 Rokkozaki lighthouse
Cape Rokkozaki, where a 130-year-old, white chalk lighthouse stands, is within walking distance from the Michinoeki Noroshi (道の駅 狼煙). Amble up the sloped hill and flight of stairs, and admire the panoramic view from the cliff while listening to crashing waves. The sign says you can watch both sunrise and sunset here, but even in the daytime, it never disappoints.

Inspect the quirky cafes and restaurants, while keeping an eye out for calm and graceful coastlines.

The road circles around the tip of the peninsula, heading south. As you’ll probably notice, the seascape changes completely after you pass the cape. The west coast of the peninsula features rugged shoreline as it is exposed to rough seas, while the east coast is made up primarily of bays and inlets filled with tranquil waters. Enjoy the duality of Noto.
28 becomes 12, and leads you to the city center of Suzu, a small place that retains its nostalgic downtown scenery.It’s time to do something for your stomach however, and you’ll find some delicious eateries around here. If it’s a Thursday, 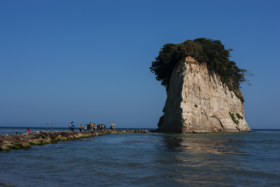 Mitsukejima Rock
Make sure to check out Mitsukejima Rock (見附島), a 30-meter (98-feet)-tall symbol of uchiura, rising out of the sea right in front of the beach. There is a rock path that allows you to get a closer look.
Couples will enjoy finding the most romantic spot - nearby Koiji Beach (恋路海岸) with its gently curved shape and red torii (a gateway to a Shinto shrine) in front of a small rocky islet.

Koiji Beach
Literally meaning “love road”, the beach has a tragic love tale, and supposedly powers to bless visitors with amorous relationships.
Tsukumo Bay (九十九湾), with its beautifully indented coastline, is another attraction. A pleasure boat ride goes along the bay (Apr.-Dec.).

Tsukumo Bay
The coastal road leads to Ushitsu Port (宇出津港), one of the busiest fishing ports of the entire peninsula. Before hopping over Anamizu Bay (穴水湾), you may stop at Divai (ディヴァイ), a cozy nook near the port, for a pizza and chat with the young, English-speaking owner.

The road shows you slow-paced,
rural environs on the peninsula. 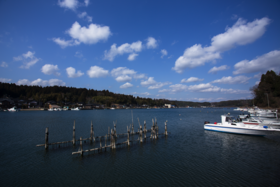 Anamizu BayThe coast that runs along Anamizu Bay (穴水湾) is really calm. It has some interesting sights including Nakai Cove (中居湾), where you’ll find a wooden tower called Bora Machi Yagura (ボラ待ちやぐら), standing on the crystalline waters. Local fishermen sit on it waiting to catch bora (mullet). It’s an old-style of fishing which requires a lot of patience.
Noto Peninsula, especially Anamizu Town (穴水), is famous for its oysters, and you can either purchase the best catch from local outlets, or order it at local restaurants during winter. Many say that the oysters caught in Noto are the most delicious thanks to the cold ocean temperatures of the Sea of Japan. 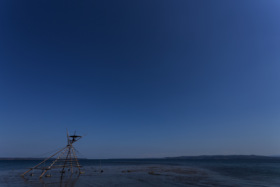 Bora Machi Yagura
Continue on Route 249 as it hugs the coastline. Roll down the window, and you may feel the ocean spray on your face. You might see one or two-car trains chugging by as the local railway, Noto Railway, runs parallel to the road. Even though this is a road trip, not a rail trip, let’s check out a couple of old, wooden stations just for fun. Noto Kashima Station (能登鹿島駅) offers a stunning view of land and sea, and Nishigishi Station (西岸駅), located near the marina, makes you feel as though you have travelled back in time with its nostalgic atmosphere. Cafe Youho (カフェ遊帆), which features Thai dishes, is just around the corner of the station. 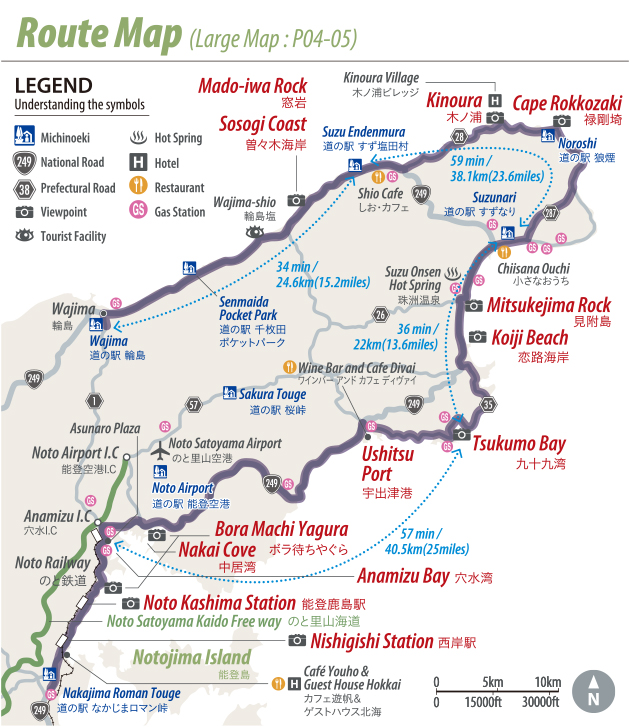 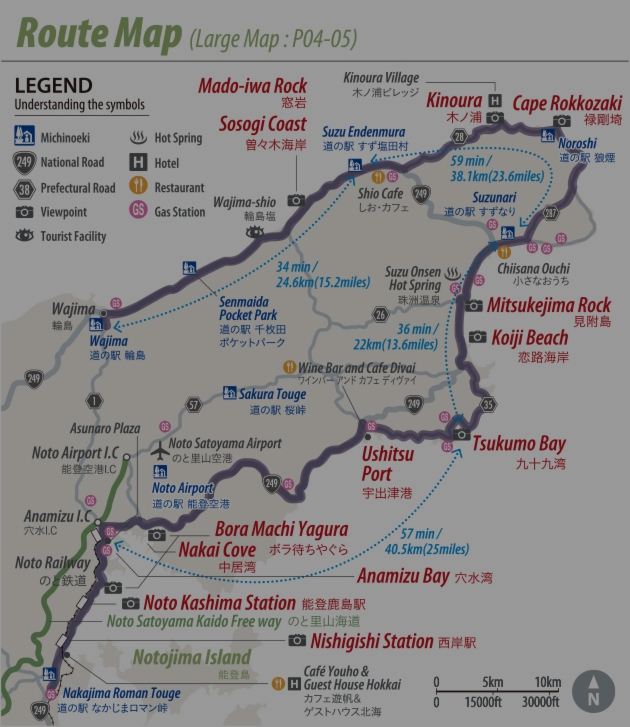